TRAVEL AT THE SPEED OF LIGHT? MEET ALICE!!

15 Aug TRAVEL AT THE SPEED OF LIGHT? MEET ALICE!!

Posted at 09:00h in Supply Chain by bitsebytes 0 Comments
0 Likes

Meet Alice, the battery-powered plane that could herald the age of electric air travel

Every minute, 84 flights take off worldwide. Last year, more than 4 billion journeys were made by plane.

Air travel underpins trade, tourism and economic growth, but it is also a major contributor to climate change.

So what about catching an electric plane? Let us introduce you to Alice – a prototype unveiled at this year’s Paris Air Show. Planes like this could be the future of short-haul flights.

Developed by Israeli firm Eviation, the plane will be able to carry nine passengers for up to 1,046 km.

The aircraft has one main pusher-propeller on the tail and one on each wing. Eviation says the shift to electric could significantly reduce operating costs, while eliminating greenhouse gas emissions.

It’s calculated the aviation industry contributes around 2% of global emissions. The sector says it is trying to combat its impact on the environment through new technology, improved efficiency and sustainable fuels.

The IATA has pledged to reduce air travel’s CO2 emissions to half its 2005 levels by 2050. 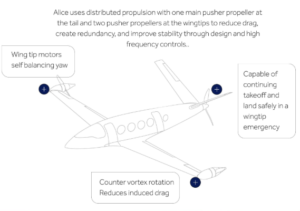 Eviation wants to make electric aviation a feasible proposition, but the technology does currently have limitations. While the flight range of aircraft such as Alice would make them viable for use on short-haul routes, that’s not the case for long-haul.

Around 80% of aviation’s CO2 emissions come from flights of over 1,500km (932 miles), according to the Air Transport Action Group. 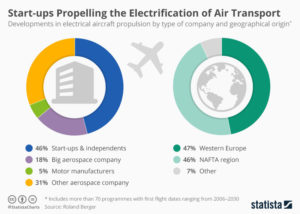 The challenges of electric flight are also on the agenda of mainstream manufacturers. Boeing launched a prototype earlier this year, and last year Airbus, Siemens and Rolls-Royce unveiled a project to develop a hybrid-electric propulsion system.

Meanwhile, US regional airline Cape Air has already expressed an interest in the all-electric Alice, saying it will order a “double-digit” number of the aircraft to operate on some of its short routes. The aircraft is expected to take to the skies in 2022.