Coronavirus: the impacts around the World

12 Mar Coronavirus: the impacts around the World

Posted at 08:42h in Supply Chain by admin 0 Comments
0 Likes

Coronavirus is making it clear that supply chains need to be more flexible.

On the one hand, authorities in several countries are working to prevent Covid-19 from spreading further around the world and to treat people already infected. Governments and companies will have to take additional action as the WHO has declared a Pandemic. Moreover, manufacturers from several industries are combating the impact of Coronavirus on their supply chains.

This crisis, which is caused by weaknesses in supply strategies, could have been avoided if these weaknesses had been corrected previously. 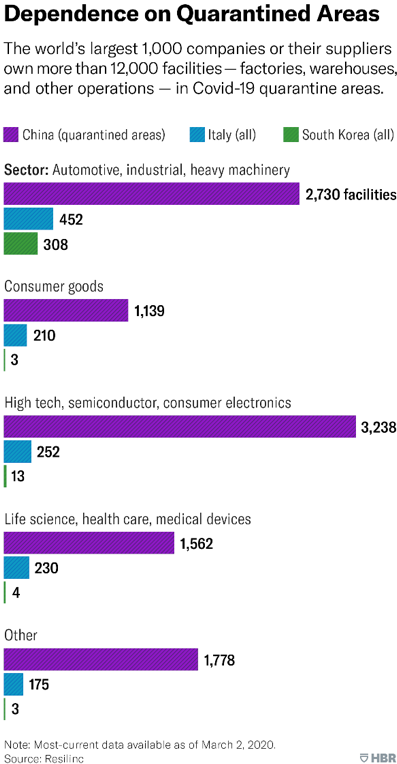 The chart shows that most of the suppliers from different areas are concentrated in areas affected by the virus.

A similar case, nine years ago …

After the earthquake and tsunami, which occurred in Fukushima, Japan, in March 2011, many multinationals suffered the negative impacts of weaknesses, which until then were hidden in their supply chains, such as: loss of revenue and even, in some cases, the loss of market capital.

What surprised the companies was the impact also generated on second and third tier suppliers in the region where the natural disaster occurred, Fukushima.

Almost nine years after the event, companies are still struggling to identify which of their indirect suppliers (who do not deal directly with the company) are based in the regions affected by the Coronavirus in China.

Several corporations also regret the fact that they have only one supplier when it comes to the items the company purchases directly from. Those responsible for the supply chain are aware of the risks of this practice, but they do so to ensure that the company has the necessary items for its operation and / or reaches the cost target.

IMPACTS OF THE CORONAVIRUS ON THE ECONOMY

In addition to the impacts on the supply chain of several companies around the globe, Coronavirus is also affecting the financial market. This was due to the fear of a global recession and also the uncertainty caused by the Chinese government’s lack of transparency.

The confirmation of 13 people infected with Coronavirus in Brazil last week shook São Paulo Stock Exchange, Bovespa, which continues to fall along with the markets of all neighboring countries in Latin America

On March 3, the Central Bank announced that it is monitoring the impacts of the coronavirus on the economy and that the period of the following two weeks would be used to more accurately observe “the effects of the disease outbreak on the prospective inflation path in the relevant horizon of monetary policy”. In other words, if the country’s inflation is also impacted by the reduction in the production of services and goods, there will be a reduction in interest rates that will follow the North American model. A lower interest rate makes money cheaper and in theory generates an increase in consumption.

On the other hand, lower interest rates increases the dollar, as the currency will be in short supply in Brazil. Imported products will be more expensive and consequently, raise the cost of some products.

On March 5, the Mexican stock exchange suffered a 2.44% reduction in the Price and Quotation Index, which is its biggest indicator. As a consequence, its local currency, the Mexican peso fell 8.5% after a period when the relationship with the US currency was very solid.

As for the disease rate in the country, Mexico is on the same path as Brazil. Mexican health authorities had confirmed five infected patients and are evaluating 35 other suspected cases of people showing Covid-19 symptoms.

Argentina has already confirmed two cases of the disease in its territory and is analyzing yet another suspicious case, with a great chance of being confirmed. However, the market is more volatile in the negotiations of the president of Argentina, Alberto Fernández, and the International Monetary Fund, than for the epidemic itself. Even so, last Friday (06/03), the Argentine stock exchange followed the global predisposition and suffered a fall of almost 4%.

Although no case of Coronavirus has been confirmed in the country, the dollar exchange rate remains at historical levels, reaching close to 3600 pesos last Friday.